Even though the idea of calculator is a bit archaic, in present day they are still being widely used in school when the problem is getting harder and help to shift how student should view on a question as opposed when they are still building the basic. As the most popular graphing calculator, Texas Instrument have a numerous calculator for you to choose such as TI 84 Plus vs TI 89. Both of them are rather similar but also different, so check our article below to see which better for you. 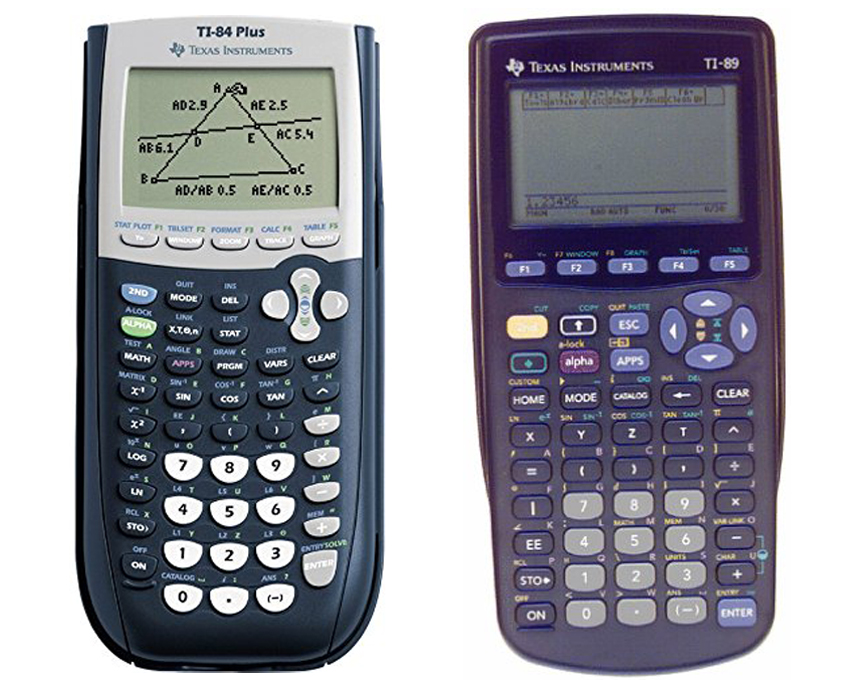 Graphing Calculator
Graphing calculator has been a long necessities for any students mainly in high school to help them during the class and help them understand a question better or even faster when they are already mastering the basic. Depend on the class your children are taking, a proper graphing calculator can be useful in various course starting from pre-algebra until college math and are allowed in several tests as well such as PSAT, SAT, and ACT which mean if they are taking the class, most likely they will also asked to have the calculator.

The debate about graphing calculator has been long gone after the benefit is clearly going to help student when learning especially to help them visualize and give better understanding on concepts in mathematics or science.

Not only student, teachers also use them for the same purpose but for teaching method and unlike some parents may believe, they are not like regular scientific calculator that will do the job for your children so they won’t need to understand the problem.

It is actually the opposite because if you ever seen or use a graphing calculator before, you will know that to fully functions the unit, our children have to have a proper understanding on how to solve the problem manually and more into helping them to be more active in the learning process. Graphing calculator is obviously not cheap but it is not something that we should purchase or change every year because depend on how students treat it, even decades old calculator is still relevant today.

People have move from measuring the students ability to compute algebraic functions to actually engage in math in the old time to now where students are asked to engage in data analysis and problem solving, this is the part where they will need a graphing calculator. When compared to recent technologies, they are old indeed but we still can’t give student a tool that can have high chance of being an ultimate entertainment in fear of it can hinder their learning, moreover, a wireless connection for example won’t be allowed in test.

About TI 84 Plus and TI 89
When talking about graphing calculator, the one brand that always showing up here and there or in any page that listing the best calculator to buy today is often have a couple or more Texas Instrument calculators because this brand is among the top you want to pick in the market. As a well-known manufacturer and already exist since decades ago helping many students in their study, they have several unit to offer, both their new releases and old models that are still available for purchase. Read also: HP-48G vs TI-89 here.

Among the brand’s most popular unit, you probably ever heard of the TI 84 Plus because this unit is indeed very popular and even now when the company already have a new version of the model, they still being in the top list of bestselling graphing calculator in Amazon. The price of the unit is not cheap and neither many other high-end calculators out there but when you consider the amount of time it can be useful, it is actually a good investment.

Do TI 84 Plus the only good option for graphing calculator? Of course not because if you don’t want to spend so much or have less to spend then there are several great items on the market that may attract your attention and still coming from Texas Instrument, that other option is TI 89 which is an older model of the newer TI 89 Titanium priced much higher due to last release and upgrade here and there. However, the original model is still powerful to help students along their learning journey.

The TI 89 is released since 1998 and it was one of the most popular graphing calculator at that time due to the high-end capabilities along with the thousands of programs develop for the unit for several purposes like educational and entertainment so students can even plays some old games in the unit while the quality of course will fall behind from what our games look like in present day. The unit is finally discontinued in 2004 and replace by the more advanced TI 89 Titanium.

This calculator is still the same unit like the old one but the company decide to upgrade the brain by using an even more powerful processor to help its processing featured with larger memory to let the user store more things on the calculator along with modern USB port for better connectivity.

At the other hand, the famous TI 84 Plus is released in 2004 similar like the TI 89 Titanium and even though the name makes it look like have an original version, there is none such as TI 89.

This calculator is the upgrade of the older TI 83 Plus and mainly have the same capabilities like the predecessor but they made it more powerful by improving the hardware to be faster, bigger rom as much as 3 times larger and a new US port built in the unit for more connectivity option which is similar like those in Nspire calculator so it can be used for device to device transfer as opposed to the older method via serial link port.

Because of the different models and release date, the older TI 89 will obviously not as good or advanced as the new models from the brand but it doesn’t mean that they calculator is not relevant anymore for purchase even today because just like many other who already using the unit, they proved that we don’t need to purchase a new expensive calculator to get all the features you can do on a basic graphing calculator for both in class or in home learning session.

Just like many other Texas Instrument graphing calculator, TI 89 are coming with the famous CAS or computer algebraic system.

If you are not familiar with the term yet, this capability means that both of them are able to produce symbolic results, can manipulate algebraic expressions, performing operations like factor, expand, and simplify as well.

Additionally, these graphing calculators will give you answers in the exact form without numerical approximations and this feature is one of the most prominent difference between both since the TI 84 is not CAS.

The example benefit of CAS for it can do algebraic operation is factoring for variable, giving the exact answers and simplifying long expressions which is of course very useful and the type of feature you have to consider depend on your need. As opposite to the CAS calculator, non CAS one like TI 84 Plus will most likely to give you decimal answers when you ask them to do something such as simplifying radical or fraction. To put it simply, if you need the one that can do “symbolic math” then pick the one with CAS. 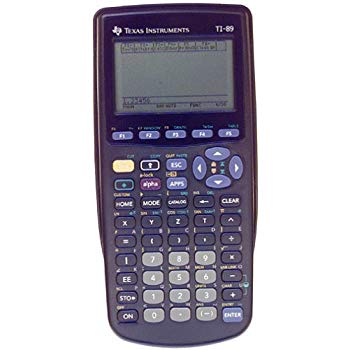 Then, some of use probably have a question like why purchasing non CAS graphing calculator then if we can have the better version. The answer to the question may vary but beside that the price may differ from one model to another, non CAS calculator may allowed in more tests than those with CAS. The next reason is if you are a teacher, most likely we don’t want to make our students have the most capable item in class for they can hinder the learning process.

The next thing that separate TI 84 Plus from TI 89 the most is the processor because just like many other items that were released in different period, both of them are coming with different hardware as well and one of the most prominent is the brain of the calculator or the processor because the older TI 89 is equipped with Motorola 68000 and are commonly runs at 10 MHz depends on the hardware version of the unit you have.

As for the TI 89 original model, there are 2 hardware version or called as HW1 and HW2 because the HW3 and HW4 are reserved for the newer model Titanium.

The difference between the two versions of hardware in the calculator is in the way they handle the display because the older HW1 will have a video buffer that stores all the information that should be displayed on the screen and each time you refresh it, they will access the buffer and flushes it to the display.

At the other hand, the newer version or HW2 will have a region of memory that directly aliased to the display controller and allow you to have a slightly faster memory access. Another difference due to this upgrade is on the processor speed because if the older HW1 is running at 10 MHz, the newer version is a bit faster because it runs at 12 MHz. If you pick the Titanium version, the processor will be even faster because they are thought to operate at 16 MHz though many users seems to disagree with the finding.

Unlike the TI 89 that used Motorola processor, the newer TI 84 Plus is coming with the popular Zilog Z80 which is an 8-bit based microprocessor at 15 MHz similar to the predecessor TI 83-Plus that runs and have the same processor. As it has been mentioned before, TI 84 Plus have other versions as well and all of them are using the same processor thus, in speed they are very similar to each other. Comparing the processor, it seems that the newer TI 84 Plus is faster than the older unit.

As for the programming, both of TI 84 Plus and TI 89 is similar because they are directly programmable using a language called TI-BASIC like many other Texas Instrument’s graphing calculator and if you are using PC, it is also possible to program TI 89 in C, translate them into machine language and copy them to the unit but in TI 84 Plus, the C is only useful when you pick the CE model. Additionally, the Zilog calculator also programmable in Z80 assembly language.

Comparison
Now, let’s compare TI 84 Plus with TI 89. As it has been talked above, the prominent difference between both of them are the CAS capability, processor and the last is memory because the TI 84 Plus is not a CAS calculator, have faster processor but smaller memory compared to those you can have in TI 89. Price wise, the old TI 89 is far cheaper than T1 84 Plus today.

Conclusion
All in all, both of these calculators are a good graphing calculator in our opinion. However, the choice depend on your need and if you don’t mind about using an old unit or have no issue about the slower processor, we will recommend you to pick the TI 89 for it is CAS and more affordable.

decalculators.com is a participant in the Amazon Services LLC Associates Program, an affiliate advertising program designed to provide a means for sites to earn advertising fees by advertising and linking to decalculators.com (amazon.com, amazonsupply.com, or myhabit.com).
CERTAIN CONTENT THAT APPEARS IN THIS SITE COMES FROM AMAZON SERVICES LLC. THIS CONTENT IS PROVIDED “AS IS” AND IS SUBJECT TO CHANGE OR REMOVAL AT ANY TIME.